Naughty Tipples is interactive. It invites the viewer to participate in a Q & A, to ask Michelle for tips & advice on several topics (i.e. dating, relationships, entertaining, networking & etiquette) and to suggest a theme or a recipe idea. A new episode is published every week at a regularly scheduled time slot & syndicated to a variety of video sharing and social media websites & apps as well as T.V.

Michelle C. is viral video vixen & New Media sensation. Since early 2006, Michelle has been producing, directing & editing video content for the web. She maintains a top YouTube Partner channel (username vlogolution) of 89,000+ subscribed fans & over 56 million video views. Tech savvy G4tv's "Attack of the Show" featured Michelle as one of the "Hottest Women of the Web". Heavy.com named her the grand-prize winner of a $25,000 cash prize for a contest as the most popular female viral video creator. In April 2011, Michelle was nominated a Semifinalist creator in the YouTube NextUp competition. 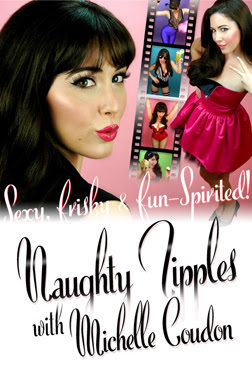